If you are looking for DAP ceramah all over Malaysia, including Penang, you can find them on this DAP website.

As you know, Penang is a hot seat for the opposition parties like DAP, PKR and PAS in this general election in Malaysia. It is always fun listening to their ceramahs because they always have more interesting stuffs to tell.

Hubby and I intentionally watch the prime time news and were disgusted with how much airtime are given to election propagandas. I mean, even a kid knows how lopsided the story is. They showed these poor Chinese women talking about their plights and how their MPs have helped them bla bla bla yadda yadda yadda. Then, they showed Puchong BN member pledging to help them yadda yadda yadda. Aww…like we believe…

After that, during the prime news on TV3, our Information Minister, Zainuddin Maidin said in an interview, “You have to vote Barisan Nasional for development. You need the roads and bridges braff braff braff and without Barisan tipu tipu tipu….” You get the gist. I have been to Kelantan a few times and when I see the kind of poverty there, I hate the ruling Government for neglecting them. It is the ruling Government’s duty to care for ALL their citizens and not strangle and squeeze those states that do not want to vote for them. I call that blackmailing. If you are a parent, I am sure you give the same kind of love and attention to all your children and not only feed the ones who are your favourites, right? (DAP ceramah held in Jalan Talipon, which is a small lane behind Telekom Jalan Burmah. The place is not conducive at all because it is so crammed and Lim Guan Eng only have a tiny spot to stand.)

That’s why I think those who keep insisting that they are going to vote for the individuals and not the party are rather foolish. Of course, the MPs from the ruling Government can do marvels (in your eyes) because they are wasting our taxpayers money. They can buy a RM567 screwdriver, remember? Didn’t these simple folks realised that they cannot see the opposition parties do much simply because our ruling Government always adopt these ‘blackmailing and squeeze and strangle till you are half dead to vote for them style’?

Any political parties can bring development to the country. And even with the same party, they can use the money as a tool. Remember how Pak Lah chopped off Tun M’s projects and claimed those are too extravagant and yet, now Pak Lah has even more extravagant ones? That’s why we need to deny BN the 2/3 majority so that the money are used wisely and not being abused. When there are more opposition parties there, they will make more noises in the Parliament.

So, after listening to the berita TV3, we decided to roam around town to find DAP or PKR ceramah. You can find out DAP ceramah schedule on DAP website and Datuk Seri Anwar Ibrahim’s ceramah from PKR website. 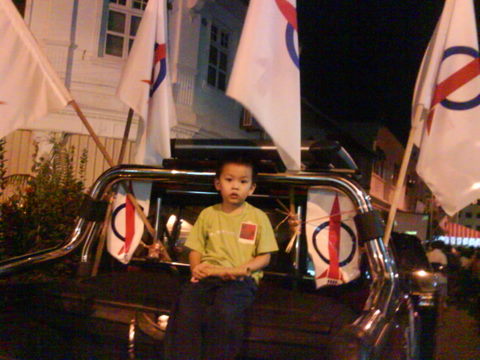 (I squeeze through the crowds, using my NIKON bright yellow strap and DSLR camera and people let me through thinking I must be some reporter from the media. 😛 Meanwhile, hubby was out waiting for me outside the perimeter of the crowds and there was this pickup truck with DAP flags. He took the pic with the Sony Ericsson S500i. Not bad photo using a cheap phone camera hor?) This is the first time I heard Lim Guan Eng’s ceramah and I must say he can speak Hokkien well. It is a humorous talk but since I have read everything on the net, I didn’t stay long as it is freaking hot! I must look out for Lim Kit Siang, Karpal Singh and Anwar’s ceramahs in Penang. Those will be da kick-ass ones.

I got video as well but Youtube is taking too long upload.

So, yes, for bloggable materials’ I braved the crowd with two cameras. This is fun! Of course, we didn’t go out just to attend DAP ceramah. We went to have char koay teow for supper lah.

9 thoughts on “Have you been to election campaign ceramahs before?”