About noon, Lawrence phoned me and asked if I am around town. He told me he just passed by and there were lots of FRU (Federal Reserve Unit or what we Penangites call Ang Thau Peng, red head army because they wear red protective helmet) in the area. I was home.

Then, later on, another person told us, don’t go to KOMTAR because there is really a lot of people there. He was stuck in SOCSO office.

I don’t quite believe both of them even though they are trusted and reliable people I know because it just doesn’t make sense. I heard UMNO is protesting that there are not enough Malay Excos in the Penang State Exco line-up. Helllooooo…..dah nyanyuk kah? Now Penang has a Malay deputy CM, Penang has Malay PKR Exco members, Penang has a Malay speaker, Penang will appoint one PAS ADUN as well. Mau apa lagi? Ok, correction, they protested about the NEP. 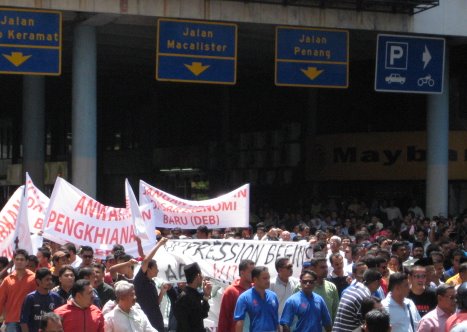 Penang is now under PKR coalition with PAS and DAP. These are people we Penang people voted into office. So, what are you UMNO people protesting lah? Tengah-tengah panas tu dok buat apa?

Gimme a break. The CM is in office for like four days and you guys already started protesting. You guys get away with it. The Hindraf march, which is the result of 50 years of the Hindus sufferings and they get tear gas and masuk ISA. You guys suka-suka sumbat the whole Penang island, causing chaos, tak kena. Why? Lucky today is a school holiday. What if our school children were in school and chaos broke out?

Take a look at this post with the photos. It wasn’t just a small group but a damn big group of people protesting. I wonder if they even know what exactly are they protesting?

Added : Below is the video of Lim Guan Eng ceramah held at Taman Lumba Kuda, Penang before the Malaysia General Election 2008. Lim Guan Eng touched on Patrick Lim aka Patrick Badawi on PGCC.

LOL, pardon the wrong orientation of the video and also the pink frame.

Added : 6.45pm A post from Anil Netto with a first hand account of the protest which is said to have 1,000 to 2,000 people. This interesting quote caught my eyes :

One thing though – there was a slight awkwardness in the marchers… and unfamiliarity… as if they were not from Penang, at least not from the island. They looked a little out of their familiar territory – just an observation.

50 thoughts on “So, there was an UMNO protest in Penang”