Tolonglah, Pak Lah, for the sake of the country, can you please tell these people to duduk diam-diam dan bersabar dahulu?

He was there at the protest by UMNO in Komtar. I watched him talking on RTM1 berita perdana about asking the Federal Government to pull back all the major projects for Penang. He talked with so much arrogance and gosh, nyonya 5xmom tarak kenal lu siapa lah! Lu bukan Finance Minister pun bukan Chief Minister, cuma a has-been, lu tarak power to tokok, boleh faham? Pak Lah, you are the leader. You are the boss. Why do you let a nobody to talk like he have no respect for you? Ini bukankah tindakan yang biadab? Hanya Pak Lah yang berkuasa membuat keputusan itu. 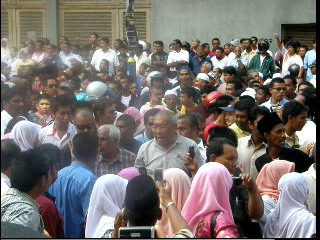 (photo borrow from Penang Watch. Dato Azahar was there in the protest, the fat guy in gray shirt, I think)

Pak Lah, we still want to respect you as our Prime Minister who is a prime minister for all races and all Malaysians. As a Chinese, a mother to four children, I am now terribly afraid of the ancaman from Dato Azahar. He said the protest on Friday at KOMTAR is just one of the many that will happen in Penang. I fear for the safety of my school going children. I fear for the safety of all my friends and family here in Penang. Pak Lah, you cannot just keep quiet and let the things seethe underneath. So many of the UMNO members have made a lot of racist remarks. The media, especially the Malay media are helping to fan the fire. You keep quiet still Pak Lah. Are you encouraging it?

FELLA #2 – And today, another UMNO member from Melaka has joined in the call to scrap the projects. Who is he? The Chief Minister of Melaka. Why does he have to jaga tepi kain Pulau Pinang? Even our ex-CM, Tan Sri Koh Tsu Koon has voiced his support to our Chief Minister regarding this.

Pak Lah, you are the mastermind of the NCER and all the development projects. How can you let your cucu-cicit to biadab and acted like they have power over you to call for the cancellation of those projects? Next thing you know, Pak Lah, they will climb on your head.

“If we stop all major projects, the people would realise what they had lost and would then come back to the BN. This is the only way we could recapture the State in the future from the opposition,” he told reporters after visiting the Menara Taming Sari project near Dataran Pahlawan along Jalan Merdeka, here, today.

To Ali Rustam, I have to say this. You are one conniving, vindictive, cruel, ruthless man. Do you think you have power over us? These projects are carried out with our nations’ wealth, not from your pocket. It comes from the tax payer’s money too. I am sure millions have been spent to implement these projects. I am sure contracts have been signed with all the parties. You no skool go, don’t know the implications, financially and legally meh? Chey….Anyway, ambik balik semua projects lah, kita tak minat punnn.

And did you seriously say :

You seriously think you can strangle, starve, choke and cekik us till we are half dead and we will crawl to the next general election and pangkah Dacing? You have allowed power to corrupt your mind, Dato Seri. I am so gonna keep this post and five years down the line, I will make sure that everyone remember what you said today. I am going to make sure that five years down the line, Google is still keeping all the bad deeds UMNO has done to us Penangites over their loss.

I know UMNO members are frustrated because they lost the island due to MCA and Gerakan failures to clinch some seats. UMNO did win many DUN seats and yet, they have no power now. But this is not the way to take out your frustrations.

Part 5 – YAB said it is unfair of UMNO to accuse DAP as anti-Malay.

Pak Lah, Penang is also your state. Like our CM said, don’t cut their noses to spite their faces. (source)

Lim urged them not to “cut their noses to spite their faces,” adding that if they wanted to punish the people for voting in the Opposition, “then you may end up punishing Kedah, Perak, Selangor, Kelantan and the Federal Territory as well.”

Many people have rumoured that you can make money as a protestors. RM80, tanggung makan dan tambang bas. Transport and food provided. Sometimes, uniforms too. Qualifications : None but must have loud voice and know how to parrot a few words. No medical and life insurance for kena hentam by FRU’s baton, tear gas or water canon. Masuk ISA, kena tanggung sendiri kut. But risk is small if you join certain political party.