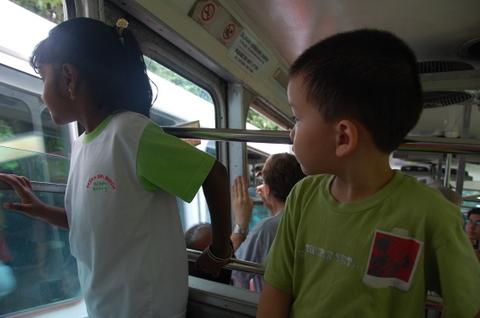 This little girl is only six years old. She took the Penang Hill cable car down by herself. When she reached there, she said her teacher brings her to kindy. We were in the same cable car with her and she is one chatty little girl. She told us her name is Barilla (or something like that) and she goes to school on her own. We asked her where is her mother and she said she works in the bungalow and sell icecream. Then, where is her father? She said ‘down’ (meaning not in Penang Hill) and he is a soldier.

Well, I don’t know about the ‘soldier’ part because from experience, normally little kids (from broken homes/children shelter) say that. I shall not elaborate more ‘cos I may be wrong. So, we asked her if she does this every day? Going up and down the 30 minutes ride on her own? She said yes. Shocking? I guess that’s life for many people. There is no school atop Penang Hill so the children have to go down for school.

So, I guess we can only pray that God watch over children like this little girl. Getting one and off the cable car is mighty dangerous because we need to change cable car midway and there are lots of steps. Then, there is the automatic door etc etc. After we had reached our destination, the little girl’s mom was waiting for her and the little girl even waved and thank us for the sweets we gave her.

We managed to talk to a retiree at Bukit Bendera. We asked if those bungalows are for rent. He said, “Tak tau lah, sekarang depa nak buat apa pun tak tau. Harap dapat kerajaan baru, lain cerita.” Well, there are lots of bungalows from the colonial times in Penang Hill. Those bungalows used to be for rental. But the retiree said, they have stopped renting out the bungalows because they want to develop the hill. Whatever they do to Penang Hill, I hope they look after those folks living there first before making the hill too commercialised. Priority is the little six years old girl who travel on the cable car alone. There are other school girls going up and down the hill too. May God’s grace keep these little girls from harm.

11 thoughts on “And we think our lives are hard….”