Mana mau lari lah? When I write the below, I didn’t notice the column mentioned my blog. *runs and hide*

Like this lah, jika berani, cukup jantan, show us what goes on in Parliament.

If the Opposition parties are indeed like what you claim :

Ahmad Shabery blamed the chaotic session today on MPs, especially those from the opposition benches. He argued that they were trying to “play to the gallery”.

then, let us rakyat decide. The votes are in our hands. If you claim they are big monkey or whatever, then, let us see for ourselves and when the next election is here, we know what to do.

But if my memories serve me well, it was the Barisan Nasional MPs who uttered all the racist, chauvinist and degrading terms in the previous seatings. Bocor lah, balik Tiongsan lah, keling lah…..

“It’s good, it should remain,” said the MP (Bung), who had locked horns with Karpal Singh (DAP-Bukit Gelugor) this morning. He had called Karpal a ‘”big monkey” after the DAP politician had branded him “Bigfoot”.

And who ask Pak Lah to go and appoint that Dung Bung Mokthar?

Lim Kit Siang (DAP-Ipoh Timor) said the shouting matches would not have taken place if the proceedings had been conducted in a fairer manner. He disagreed that the ‘live’ telecast should be discontinued.

(Receiving) the ‘live’ telecast is the right of Malaysians; (telecasting) it should not be the prerogative of the government,” said the veteran politician.

(all quotes taken from Malaysiakini)

So yes, bring it on. The show must go on. I want to see the behaviour of the MPs we voted into Parliament. The power is in our rakyats’ hands. The time allocated for Parliament seating is surely more interesting than RTM1 basi, berkulat drama. 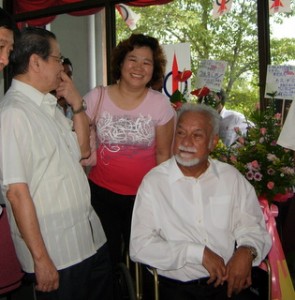 (Related posts to Shabery Cheek and other posts and a sinis post.