I pick up these photos on some Chinese forum and wonder why only the Chinese papers feature the flood in Penang? Like they say, a picture says a thousand words. 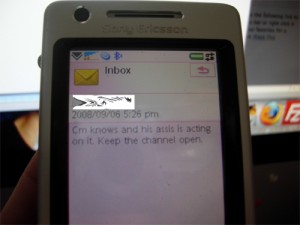 The above is my phone’s SMS. It was from one of the CM’s staff. This afternoon, he told me the CM is still at the various locations which were affected by the Penang flood.

Meanwhile, yesterday or was it day before yesterday, my atm told me the CM went up to Penang Hill. (atm went hiking every morning and even bumped into LKS hiking alone) I read in the papers that the Federal Government was the one holding back the funds to repair the funicular train. I was like WTF!?!? Do you remember I ranted about Gerakan Chia Kwang Chye urging the Penang State Government to repair the train fast? Sad that the folks staying up in Penang Hill are put through these hardships while the Fed Gov. is holding the money, squeezing the PR led State Government, while BN is fanning fire.

I am glad that Gerakan has slowly come to some senses. Gerakan may quit Barisan. They should heed Tony Pua’s call to Gerakan and MCA to leave the Dark Side and join the Jedi Knights.

I am utterly disgusted with the sandiwara put up by Pak Lah and his UMNO gang. Be gentlemen lah. One means one, two means two. Don’t be like tarak tulang, one minute say Ahmad must apologise, next minute say cannot find him and then defended him and now, they are shaking hand and Pak Lah said, :

“What happened is supposed to be a practice of freedom of speech and to voice opinions according to what is felt by the person who made the statement. But what was not supposed to happen has…

Pak Lah, what freedom of speech? If got such thing as freedom of speech in Malaysia, why Syed Hamid is threatening to put RPK into ISA? Real man doesn’t twist and turn and flip flop like you do.

I just scolded one woman, “Boh nau eh” because she strewn pau skin to feed pigeons in the midst of people eating this morning! I am going to repeat to Pak Lah and his gang. “Chia chia boh nau eh. Ancua cho cheng hoo?” Nay, go interpret lah. Freedom of speech mah, I am only voicing my opinions nia.

Folks, if you take the photo of the CM, please credit the source. I think it is Kwong Wah but their website seems to be down.

(yayaya, I know it is my birthday and I am NOT suppose to blog but who cares lah, CM is my #1 hero mah but I terlajak to PM pulak)