After a lapse of six years, I have to look for a suitable kindergarten in Penang for my little boy.

I have forgotten how many years old this photo is. If I am not mistaken, it is probably taken in 1996 ‘cos my #2 looks like he is four years old.  The photo was taken in April 1996, when my #1 celebrated his 6th year old birthday at Tadika Sri Kancil in Bayan Baru. Anyway…..after a lapse of six years, I thought I am going to send  my youngest boy to the kindie which my #3 son went to.  But alamak, the school fees are so darn expensive now.  They have so many kind  of fees on top of the RM215 per month, monthly fees.  Full day care is RM510, half day care is RM380 and kindie is RM210, where I have to pay in advance the fee for December even when my son doesn’t go to school.  Tiu lor, yam kung….RM2,920 in total and that doesn’t include the price of the uniforms and whatever chowahkua costumes they are going to force me to pay during school concerts and sports day.  So, sorry lah, my little boy is not going to the same kindie like my #3 son. 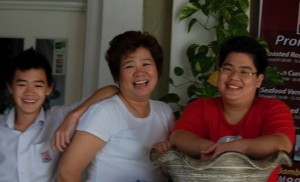 So, now I have to go kindie shopping.  Been to three and still searching.  At first, I thought of sending him to Trinity Methodist kindie but I don’t feel comfortable with the low number of students there plus the surroundings. My little boy is going to a government school with a class of 40 pupils per class in 2010 so I won’t send him to a class with 8 students now. Otherwise, he will get a culture shock when he enters primary one.

Anyone has any nice kindie to recommend? Somewhere in the Green Lane area. How come we don’t have government run kindies around ah? Cheap-cheap type. Like my eldest son suggested, “Chey, ma, use the RM2,920 to buy a laptop for Matthew can already lah.” Ya hor, then, just throw him into the public playground to socialise. Good idea, wei.

31 thoughts on “Wah piang! Kindergarten in Penang so expensive”