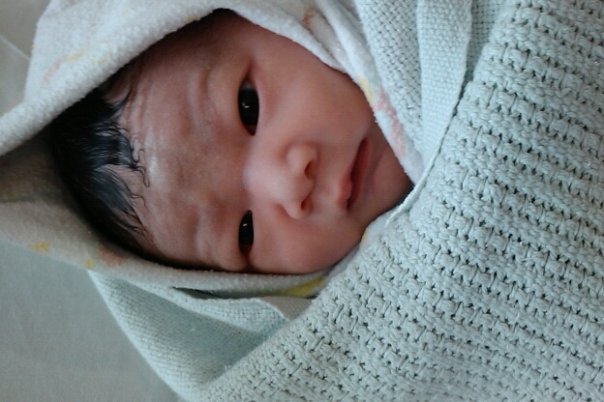 First, let me share the photo of my nephew’s HM Goh’s new baby. She arrived this morning. The wonders of Facebook. Just minutes after birth, I can see her on Facebook already. Isn’t life much easier now with Facebook and mobile uploads? The baby girl is sooo pretty with huge eyes, patch of dark hair and fair skin. Then again, my nephew is handsome like Andy Lau and his wife so pretty, being an ex-air stewardess. Kor-kor Adriel who is just about 18 mths is now the big brother. Wonderful.

Meantime, today is also my #3 son’s 13th birthday. How times fly. I remembered the frantic rush to the hospital in the middle of the night because I was too stubborn to go to the hospital earlier. At that time, my two older boys were around 6 yrs and 4 years. We had to cart the two sleepy heads to the car with us because coincidentally, my sis’s house phone was unreachable and we didn’t have time to send them there.

I ended up having 5 minutes contractions in the car on the way to Adventist at 3 am in the morning. Sigh…it was one hell of a dramatic birth because the baby was 4.1kg, it was too late for any pain control and it was my mother’s 100 days (after death) prayer. I still remembered foolishly telling my ob-gyn while on the delivery table, “I don’t want to give birth yet, I want to go for my mother’s prayers first. I want to go home!” Later on, when the pain was too bad, I told him, “I am going to die already.” And Dr. Ng in his Cinapek, cool way told me, “Lilian, we are all going to die, sooner or later. But for you, not so soon.”

Of course, hubby had to take the two older boys home (as it was 4-5 am in the morning) so he escaped from being abused by this very angry, very stubborn woman in labour.

Today, I should, would, wish like hell that I am at the Malaysiakini’s gala dinner. I somehow feel I am part of Malaysiakini. Never mind that I do wear a citizen journalist tag signed by the editor, Steven Gan. Don’t care that all my videos are on Malaysiakini.tv. It doesn’t matter that many politicians already know who is citizen journalist Chan Lilian just from my videos. Somehow, not being there on this special night, still make me feel like I am just a by-stander. And that is so sad. So, so sad. But then, family comes first.

My little boy had practised hard for his school year end concert. He is going to receive a prize for being second in class. Beside that, he probably won a few other prizes as well. He is such an obedient kid, they would give him an angelic award or something. So, I cannot missed that moment.

So, yeah, be happy. I have to miss the Malaysiakini dinner. But…. who knows, in another 10 years time, I will be Malaysiakini star video journalist. Kekekekeke.

2 thoughts on “A new baby, a birthday and a concert”