There is a huge difference between sending the eldest son to Primary One and sending the youngest son. Many, many years ago, I forgot how many though, my eldest son flung my hand away when I was holding his hand outside the school. Whereas, my youngest doesn’t mind me sitting next to him in class and cuddling him, kissing his head, hugging and pinching his cheeks. My older sons always said, “Ma…you are turning him into a Chao Ah Kua!” Nay….don’t care. We enjoy the bond. 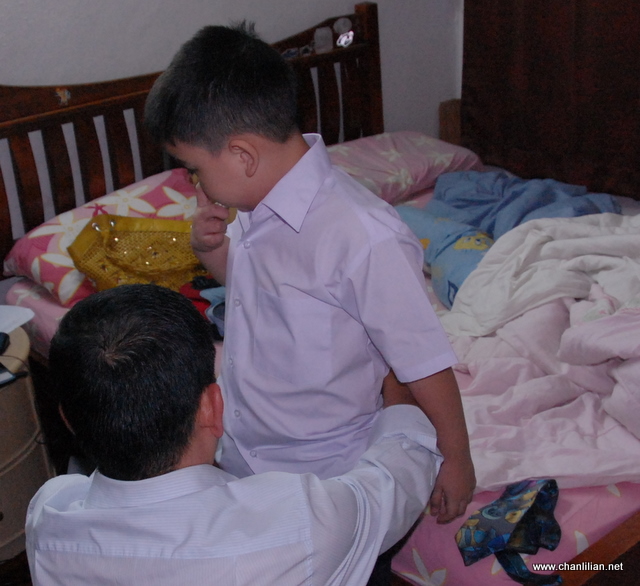 I was glad he found two friends from kindie. One of them is in his class so they sat together. As usual, with just the Standard One parents, there is already no space to park. Lucky, our apartment is still not rented out yet. So, I could park in our apartment car park. I told hubby I am going to ‘rent the place’ from him so that each morning, after I dropped my son, I could go to the old apartment, turn on the aircond and take a nap. I could also bring some pots and pans and cook Maggi Mee, drink Nescafe and bring my laptop for entertainment. I seriously think we should forego the rental income and let me de-stress because I hate the new school year when parents jammed up the road with their inconsiderate parking and waiting.

We parents were told we need to pay RM23.90 for some files, badges, t-shirt. Ok, no problem. But the teacher announced we need to pay RM47.90 instead. Some parents were caught by surprised and they cannot find RM47.90. Seriously, to some people, RM50 is a lot of money. So, I asked the teacher what’s the extra Yuran Khas for. She told me the Kementerian (education ministry) directive. I don’t take these sort of nonsense because I know there have been far too many etc collections like asking pupils to buy insurance lah, pay for computer class that teaches nothing lah etc etc.

So, I asked the headmaster. Well, he is a nice chap. Much better than the previous Mr. Leow, Mr. something forgot his name and another one. Gurubesar
immediately caught my drift. I told him I am not paying the RM24.90 if it goes to the Kementerian. If it is for the school, I don’t mind paying at all. He immediately whispered to me, “noo..this is not political one, don’t worry. The money stays in the school and spent here.” So, I glad pay up. 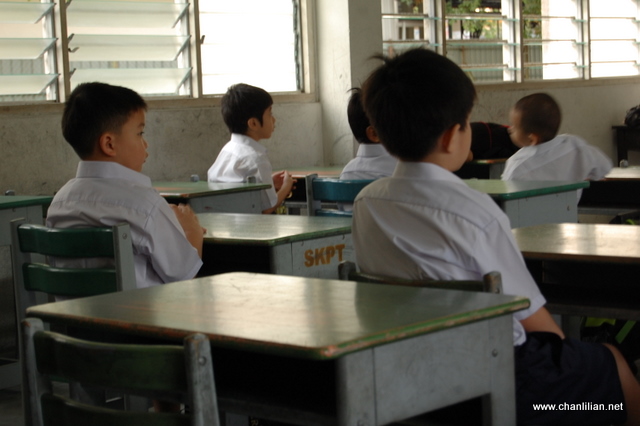 Well, parents, be more involved. If other parents dare not question, do it for them. During Hishamuddin time, he set the policy of free school books for all student and I welcome that. But this new Education Min. doesn’t give me much faith. He cannot even make up his mind about the PPSMI. At least with Hishamuddin, he stood his grounds.

Regarding these money we pay to the school, I am reluctant to pay because our Federal Gov does not disburse money to the schools equally. Chinese, Tamil and Mission schools get lesser allocations. Where got fair, right? So, why pay when they don’t fund the school? Once, I asked CM when the Penang State Gov. allocated funds to schools. Wuah, I must be damn fierce cos he quickly explained to me, “Lilian..don’t worry, the Penang State Gov doesn’t discriminate between vernacular schools and sekolah kebangsaan. The different groupings are merely an administrative thing.” So, okay lah, I believe Penang allocated funds to school equally without discriminating between Kebangsaan and dan lain-lain. 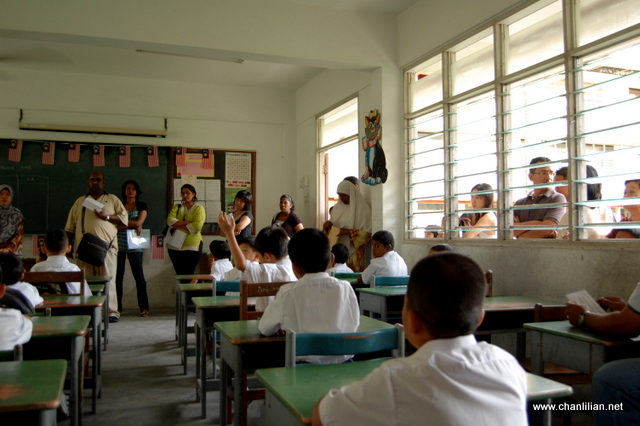 The number of students entering Primary One in my son’s school have dropped tremendously. Last time, during my elder three kids, they used to have 40 in class. Now, my son’s class has only 24 students. But, I am glad because that means more attention for the kids.

The PTA chairman from St. Xavier Institution (whom I had interviewed and video-ed during the PPSMI PTA meeting) was there to brief the parents and I am glad that the primary school is closely monitored by the Board of Governors (of the LaSalle schools?) 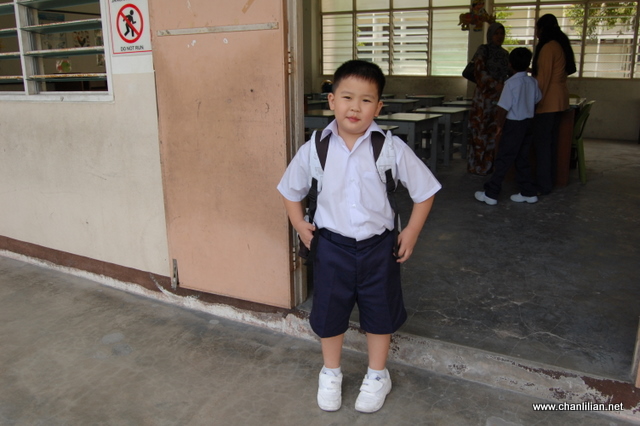 I did not sign my son up for Mandarin classes. Mandarin and Tamil classes are held every day after school. My hubby is so anti-learning Mandarin so I am too lazy to argue with him about learning an extra language. So, from Monday onwards, it is 7.45 am to 12.35 noon for Mon-Thu and 12.05 noon for Fridays.

My boy loves school. I am so glad for that. However, I have a lot of prepping and coaching for him because entering a public school is not the same as going to kindie. You meet all sort of kids there. Good ones, bad ones, weird ones….There is one who will slap everyone who goes near him. He slapped my butt twice when I was passing through. Sigh….I wish our school has special classes for special kids. But what to do….we are still very far behind in understanding all the special needs kids, the learning difficulties kids, the hyper-active ADHD kids, autistic kids….Kinda sad because our PM’s wife is instead channeling money to build school for geniuses instead. I wonder if she had study the stats of the special needs children versus these so-called geniuses?

Hmmm…I am such a wet blanket. Wutudo….I am a CJ at heart so my eyes are always open to these injustices and discriminations.

5 thoughts on “First day of school”