I have another heart-warming thing to write down today. After my previous post which was written from McD Green Lane, I went to see my son at school. I forgot to bring down the sausage McMuffin from the car for my son.

Earlier in the morning, I told my son’s classmate’s mother (hmmm can I ‘s so many times?) that I will help watch out for her son during breaktime. The boy is rather stressed out yesterday as he is also the youngest child.

So, when breaktime comes, I asked the two boys (my son and his friend XN) to the canteen. XN has a container of tarts. My boy is having catered food. Actually, it is an arrangement whereby I asked the Malay canteen caterer to prepare a plate of non-spicy foods for my son. This way, he doesn’t need to go and buy. Later when he is much more familiar, he can enjoy spending money on his own. (and trust me, all my sons can certainly spend!) 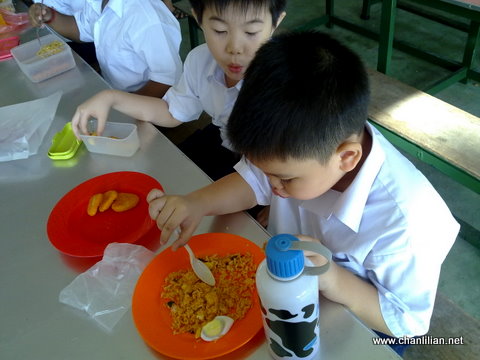 The two boys sat down. My boy opened the plate and found a piece of nugget, a quarter egg and rice. His friend saw the nugget and said, “Nugget!” I was soooo touched when my son immediately tore the nugget into two pieces and gave his friend without hesitation. Of course, the nugget was not of the same size so he did think twice whether to keep the bigger or smaller one. But still, I am so proud that he doesn’t need to be ask or ignore his friend. I later bought three more pieces and my boy immediately told his friend to take two. (3 pcs for RM1) 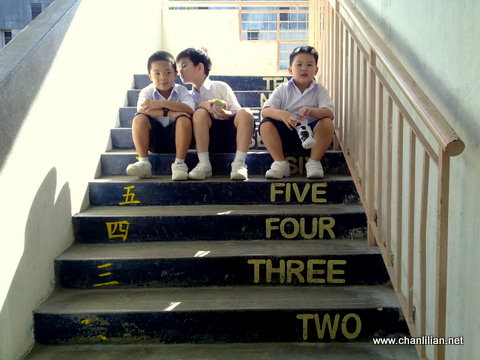 It is almost like one of those Christian chicken soup for the mothers story to me. The Lord has certainly watch over these little boys well. They went to kindie together. This photo is sooooo lovely. I wonder if any of you can still remember your Standard One buddy?

When I was in Standard One, I have no friends because I can’t speak Bahasa Malaysia, my father never send me to kindergarten and all the children are Malays. I only have my eldest brother who kept me company. Now, I look back, I wonder what happened to that meek little girl? I was soooo meek, I dare not even go to the toilet alone. My mother had to take me to see ‘ang kong’ (medium in trance) and get me an angkong hoo (those Chinese talisman). But the KNN angkong said I cannot bring the angkong hoo into toilet because toilet is dirty and the angkong will run away.

But the KNN thing is I was afraid of ghosts in the toilet, doh. So, everytime I needed to go to toilet, I had to unpin the safety pin which attach the red cloth triangle angkong hoo to my pinafore. Now, I still have the rosary to keep me company. I jumped from angkong hoo written in blood (when the medium cuts her tongue) to rosary. Blame it on childhood trauma.

I was such a screwed up little girl. Now, I am still screwed up. Because while other parents are talking about their concerns regarding their children with the gurubesar, he and I are bitching about stupid system, unfair treatment and we practically laughed till pecah perut at stupid things that people do without thinking twice. He is one darn cool obnoxious kwailan school head because he said he doesn’t care about holding assembly for the school children.

I told him, ‘yayaya, my older boys had to sing 5-6 school and patriotic songs when they were in primary school and yet, they don’t give a shit about things and instead hate it.’ Damn….I like school already!