The Minister of Health has just made another alarming reminder to everyone to consider getting themselves vaccinated with the AH1N1 prevention jab. I suppose the rising numbers of AH1N1 patients and the number of people who died have prompted this.
The AH1N1 infection has claimed 82 lives (as at last count) in Malaysia.

Though I am not normally paranoid, I have to pay attention and take things seriously. My 7 yrs old boy comes back with AH1N1 prevention tips from his school. Like all parents, I do get a little apprehensive when we read about more deaths involving the A1HN1. 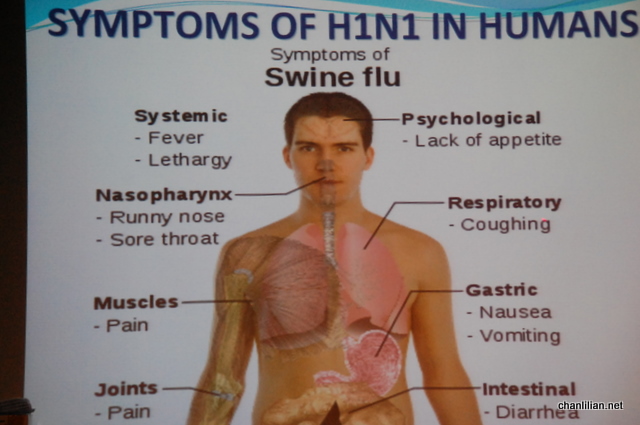 He said, “Mom….teacher said if I have cold, sore-throat, fever and I forget what else, teacher said I cannot go to school.” The children are briefed about hand-washing, not sneezing into their friends’ face and other AH1N1 prevention measures at school assembly.

With AH1N1 outbreak looming in the horizon, can we afford not to be bothered about it? I don’t know about others but I would do what I can to protect my children. I have asked at least three doctors what they think of AH1N1 and other seasonal flu jabs. Is it too much to subject our child and ourselves to this injection? It is a yearly thing as flu bugs change and they need new vaccines periodically.

I am surprised they told me they also give the jabs to their own kids. I asked them further, “Isn’t that rather unkind? Our kids have to go through the trauma of getting an injection every year?” They know I am only kidding because a jab is nothing to my boys. It hurts less than an ant bite. All three of them told me it is a small price to pay – a tiny ant bite-like jab and a hundred plus Ringgit cost versus potential risky and deadly illness.

A flu infection sometimes land our child in hospital. Normally, a bout of antibiotic jabs last at least three or five days. The bills go into thousands of Ringgit. Then, there is the agony of caring for our sick child. But this is not the simple common cold we are talking about.

Now, regardless of whether it is the current AH1N1 pandemic or the annual seasonal influenza, we are talking about a life threatening disease that could potentially turn nasty. So, that’s why Dr. Wong assured me to see the seasonal flu jab, incorporated with the AH1N1 strain as an insurance for myself and my sons.

I was given the seasonal flu jab (incorporated with AH1N1 strain) the other day when I was in KL. Several of us mommy bloggers and moms-to-be bloggers have the opportunity to be briefed by Dr. Wong. I asked Dr. Wong’s permission to allow me to film the briefing and I shall produce a video on AH1N1 later on. I even get someone to film me when another doctor, Dr. Dominic gave me the seasonal flu jab (incorporated with AH1N1 strain). I looked more tensed and nervous than the 6 years old girl who had the same jab.

So, if you ask me if you should also consider giving your child and yourself the AH1N1, I would say yes. And do you know why the AH1N1 was initially referred as the Swine Flu? I asked Dr. Wong and he told me they found the virus in a pig first so that name sort of stuck there. But he said whether we eat pig or not, we will still get AH1N1. Though those in the high risk group are more prone to nasty infection that can be fatal, we also have to be very careful because the virus can mutates and if that happens, it will be hard to contain.

You may want to know that the jab I was given do not give me any fever, aches or swelling as I was told it is a much better one compared to the free jabs. This is to assure you that it is a painless process, unlike what I read in the papers where people may get some fever, aches and swelling.

May I suggest that you surf for more information at Sanofi (www.sanofipasteur.com) because they have a lot of information on infectious diseases including the seasonal flu, AH1N1 and other health tips.

This community message is brought to you by Sanofi

3 thoughts on “I had the H1N1 and seasonal flu jab”