*grins* My seven years old boy told me “Mom….my school teacher got read your blog one, you know….?”

Yesterday, I went to the office to get permission slip to take him home earlier because I have a last minute assignment. Bad mommy, have to steal him from his lesson . But it is better I do that than to let him wait or worst still, ponteng myself from work. Usually, I get ample notices so I will plan but it was an exception yesterday. 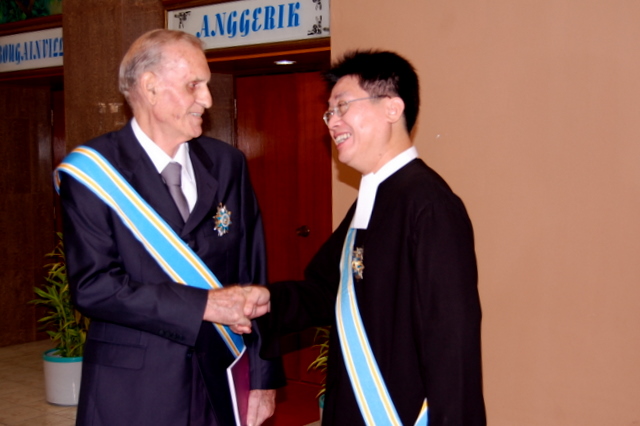 So, at the office, the clerk told me, “Kamu yang memasak kat TV tu, kan?” Die…now even the clerk knows I am sometimes seen on TV.

Ok, never mind, since there are Xaverians out there, here is a video of Brother Paul I took. He was at the Dewan Sri Pinang with Brother Charles. They had just finished receiving their DSPN award which carries the title Dato’ from TYT Governor.

We are not allowed in the hall when the award was given. So, when they came out, I was so excited to video Bro Paul after one of the teachers from SXI, James told me they were there.

Unfortunately, I also have to video the MPPP 13 Unsung Heroes so I had to cut short the short chat.

I only get a few photos of them because my DSLR camera kept getting jammed. Not sure what’s wrong with it.

Bro Paul looked so special in his black robe. He wasn’t wearing a lounge suit but the signature cassock except it is black instead of the normal white one.