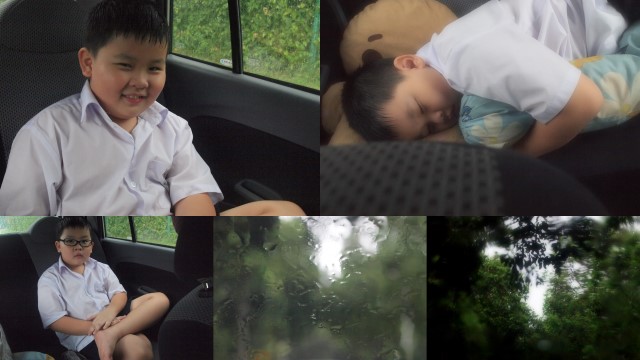 Some things to keep as good memories.

Today, 2nd January 2011 is the first day of the school year. After so many kids, I have stopped bothering with all the normal things first time parents fussed about.

I got him to school quite early and stood outside the class like all the other parents did. It was only 7.30am I told the class teacher he didn’t have his buku bantuan yet because he ponteng-ed school last year, right after his exams. He also doesn’t have exercise books because why bother to make a trip to the school to get it during school holidays?

He had been grumbling about hating school but I suppose it is normal. I hate school too. But I am mommy so I cannot be agreeing with him without giving him a dose of enlightment and wisdom.

I told him he must be thankful because children in Sarawak have to travel by broken sampan and then walk far far just to get to school. Even that, their schools are broken huts. Initially I wanted to say children in Africa but I am not sure why the white hair rajah popped up in my mind.

I left him at school around 8 am and told him I will return to fetch him at noon. But around his break time, I felt guilty cos I am at home, in the comfort of my home office, while it was raining and very cold. So, I told myself that I should just pop by and see if he is ok with the new teacher etc.

I went but didn’t bother with umbrella cos it was drizzling in my area only. Got there and he already had his sandwiches. So, I told him to go ahead and I will buy him his exercise books. I queued up for 1 hour and 20 mins. Lucky I am in a very good, patient mood this morning. Anyway, it started raining heavily and I couldn’t go back anyway as my car was parked more than half a kilometre away.

The other thing is, I was eavesdropping and also tweeting about how PR gov had helped mission schools. You know…doing what I am supposed to do, disseminating information. Also, I mentioned that some of the school fees (albeit just a few ringgit) are actually for the education dept and we parents can refuse to pay if we do not agree as I felt there have been too many wastage. I did that last year, whereby I pay only what’s for the school expenses and any funny yuran, I refused to unless they can tell me what they are doing with the money.

I was eavesdropping on the phone conversation of the woman behind me who was talking on the phone, really loud, in English. Even if I am deaf, I can still hear how silly it was for her to give her bank account access to a man who withdrew RM1.5K from her account. When she blocked her card (or rather change password of her online banking) he turned abusive. She was going on and on near my ear so how can I not hear? Well, what can I say? Women are foolish. I am only human, I turned around to see if she is that hot as she claimed the guy is a doctor. And she didn’t even know where he worked! Just because he told someone on the phone what medicine to dispense! Aiyoyo, sister, how can likedat? You are a single mother with 3 kids, focus on your children lah. Why get cheated so easily? Never watch Bollywood issit? He wants your body, give already, no rugi $$$ but you give money, those are your kids future. How can…

Anyway, that occupied me for a while cos after her conversation, she was lamenting about the death of her husband to the woman behind her. Sigh…I am a blogger so everything that is bloggable, I have to listen lah. I care for the society mah, right?

After those eavesdropping are done, I reflected on society in general. How single moms struggled hard. She is really pitiful cos her three children are so young and she has no job. I hope she gets wiser and tougher and just focus on bringing up her kids. Minus the foolish romantic notions that the man who stole her money is actually doing it because he cared for her and wanted to ‘invest’ the money. My arse! (of course, I could only listen and not responded)

Can you believe it that when I finally get to buy the exercise books, it is almost 12.30 noon! And it was still raining. So, I decided to walk in the rain with my little boy.

Both of us enjoyed the walk cos everyone run like headless chicken to get to their cars but here we are, mom and son giggling away. I covered his head with a plastic bag while I covered mine with a non-woven (whatever that means) recyclable bag. I gave him my scarf to cover his body while I kept checking if the ‘wet t-shirt’ effects appeared. He was drenched, so was I. But he had so much fun when the rain tik-tok-tik-tok on the plastic bag on his head.

I told him it is just like taking a shower but instead of standing under the shower head, we are walking. He said, ‘No same lah, that one tap water, this one got virus one’. I told him Mother Nature very clean. He asked, ‘Why mother leh, why mother nature is mother?’ I really don’t know, so I said, “Cos we have Father God already, so we can get confused if we have Father Nature”.

He was sound asleep whileI was caught in a jam that goes nowhere. The car wasn’t moving at all. I think it took me an hour to get home.

He thanked God for the fried rice I whipped up the moment I got into the house, wet t-shirt and dripping pants. He asked me, “Mom, just now you stand and queue for so long?” Yes, praise God he realised that.

And then, after thanking God, he thanked the pig! For giving him ham in the fried rice. He forgets the woman who turned the pig’s ham into fried ham rice. (actually it is chicken ham)

And I thank God somehow someone either forgets to inform me that there is work or someone decided better not to tell me cos I was busy tweeting about being stranded in the rain with a car that is a mile away. Whatever, I thank God for everything.

For not being a single mom.
For not being so foolish to allow a strange man to take money and threaten to hit me when I stopped it.
For the ability to laugh and enjoy a walk in heavy rain.
For not falling sick despite of all the dramatic stories of getting sick.
For the kind woman who wanted to shelter us with her umbrella (which I declined and bluffed her my car is very near already)
For having a kid who remembers to thank God and also the pig.

5 thoughts on “Those little memories etched in written blog”