Burger King opens its first outlet in Penang and everyone is raving about it. Some of my Facebook friends queued for a long time to grab a Burger King and yet, happily announced their satisfaction after a meal. I wonder why? Penang people are hard to please when it comes to food.

I had eaten Burger King in KL, Singapore and Hong Kong because we usually like to try something that we don’t find in Penang. So, when I see Penang folks describing their experience with a Whopper or any of the Burger King’s burger, I suppose they have won the Penangites over.

Few days ago, we finally visit the first Burger King outlet in Penang. As expected the place is still packed with customers. It is probably because of the promotion they are having now. For an additional RM1.20, you get the Go Large promo.

So, what’s a Go Large promo? You get a large size drink and fries. And the nice thing is you get Burger King onion rings if you add an additional 50 sen. That is a good deal cos the onion rings are so nice. Golden, crunchy, crispy onion rings.
But that’s not all. You get a free sundae. Topped with chocolate sauce. So, it is a very good deal because that sundae alone will cost a few ringgit at other places.

I admit I am not a burger person. I don’t like having minced meat in between buns. I like my foods spicy with a bite. So, the Black Pepper Grilled Chicken sounds perfect for me. It is a piece of real chicken meat which is juicy and flavourful, covered with oozing, spicy black pepper sauce and fresh vegetables. 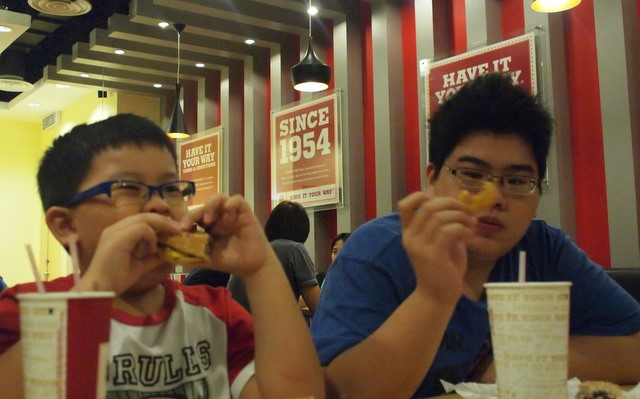 My eldest son opted for the Beefacon. My little boy asked me, “Mom….do you know what is Beefacon?” I don’t have a faintest idea. Mr. Smart Kid said with a smug look on his face, “Beef bacon. Can you see the beef bacon in between the burger buns? That’s why it is call Beefacon.” Everyone grab a bite of the Beefacon because it is tasty and something different. The sauce in the burger is sweetish and has a nice smoky flavor.

My hubby had his usual Whopper which is his favourite. My boy asked for the chicken tenders.

I guess Burger King is going to be so packed this Chinese New Year. Many of us Chinese get very sick of having home cooked foods after a day or two. Because of the festive season, we get rich, delicious seafoods, dried imported meats and traditional Chinese foods from every homes. But after a few meals, we need to look for ‘something normal’. And Burger King Black Pepper Grilled Chicken sounds like a good idea of a simple meal because the chicken is flamed grilled. 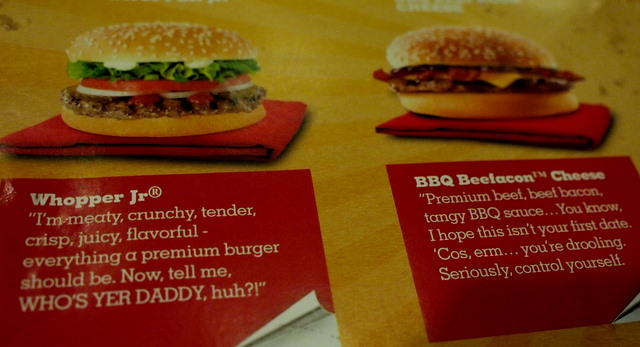 So, have it your way at Burger King. Check out Burger King Facebook page here at http://www.facebook.com/bkmalaysia

One thought on “Have it your way, the Burger King way”