Its a nice Saturday. I have a little break at home. Hubby has taken the kids to catechism class, and I only go later for mass at 6 pm.

I think it is good for me to go to mass today because the priest will certainly give us moms a special prayer. Mother is held highly for us Catholics, especially because we adore Mother Mary, the earthly mother of Jesus. The one who took Jesus’s body and cradled Him on her lap.

When I first join the Catholic church, I could so relate to the sorrowful Mary. The church was my last solace. I left everything else behind, my previous faith, my previous life, my previous happiness…… Going through seven months with my Vincent is not something anyone could endure. I did it with the Grace of God and I came out of it a better person. 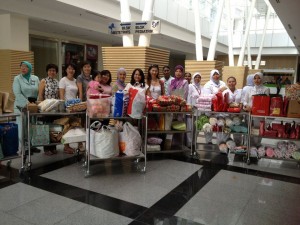 The above photo was taken this morning. My friends from the breastfeeding group I started in 2003 were there to bring gifts to mothers in the hospitals.

I didn’t go. Because if this photo has made me cry, how would I feel walking down the long corridors and mazes of blocks of hospital wards and confusing doors to reach PICU? I don’t think I want to go through the pain but sometimes, whether I like it or not, once in a while, when the thing strikes, it hurts just the same.

Many years ago, we had this Mothering Mothers, i.e. giving personalised gifts from mothers for the mothers in the UMMC. This was where my son died. And so did my friend Kah Shin’s baby Ryan died. And many others.

So, no one understands the feelings of the mothers who have children in Paediatric ICU, HDU and cancer ward, plus some long-staying ward than I do. The terrifying time, the lonely long hours when we do not know what is going to happen, the overwhelming feelings when we encounter all the medical equipment like the dialysis machine, the SPO2 thingie, the blood transfusion thing and the respirators.

Long time ago, while I was recovering from my grief, I put myself in the role of comfortor. I lent my friendship to other moms in the same shoes. I actually was punishing self by cutting myself open (literally speaking, not physically) by being there for the moms while they struggled with their babies. It helps, it numbed my own pain when I see others having the same thing.

But I am glad, I have moved on. I have stayed away from giving support and also grief support. It is a selfish thing to do but for my own health, my own mental health, it is a good thing. My doctor said so.

So, this Mother’s Day affected me more than usual. Vincent died on May 1st. Ten years ago. I didnt get affected much then and I thought, ok….good….Lilian, you are now better. But I guess it bites again.

However, nevermind, I am not who I am if I cannot shake off the feelings. Maybe a bit of chocolates, a bit of shopping, a bit of doing something out of the ordinary will make me forget again.

And hence, on this Mother’s Day, I have nothing to feel except that I had somehow touched the lives of some people. Through the gifts my friends in KL brought to UMMC this morning. For all the moms hanging there in PICU, HDU and cancer wards, may they also be given the same strength like how I had received.

May they learn to accept whatever comes their way and know that God has His plans for us. It may hurt but God heals. Except on certain days.

So, yeah, off to wash the face, put on make-up, wear nice-nice and go Happy Mother’s Day with the church. Hope the priest doesn’t make any sappy, sobby homily and make me cry again. Last week, Father Martin our new priest talked about a mom with placenta praevia and I almost died. I had placenta praevia which caused severe bleeding which caused Vincent to born premature and died. But Father’s homily has a happy ending which was like a smack on my face. However, the message I got from last week homily was ‘Be bold, ask God for what you really want’. And all I want is to be what God wants me.