I just realised I have not blogged for months. I wonder why? I think I have sort of betrayed self when I stopped cussing, stop ranting, stop condemning, stop criticising, stop pointing out, stop being obnoxious.

It is of course nice that I am being good. But I realised I can soon be sucked into the fake world that normal people live in. You know….the kind where they are all goody-goody, holey-moley for the sake of looking good.

It is partly Facebook fault. When I want to say something, I have to remember the wide spectrum of silly people who think they own my life, my manners, my character bla bla bla and they think they have the privilege to comment like I invite them to.

So, I stopped. Sometimes I wrote a 3-4 para of things and then, delete it. Facebook is no fun for cursing people because even if I am only ranting on one person, 9,999 others think it is about them.

Maybe I should just come back to my blog and blast people and put a disclaimer that it is none of their business. I can also close my comment and let those constipated people feel like they are going to explode with their own shits and yet can’t find a place to put their two cents worth.

Oh I insert a collage of my pix during my hike to Monkey Beach because I can. And also to remind myself who I am. 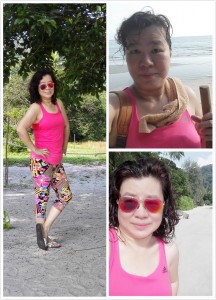 Really, the world is no fun when it is so full of fake people. You ended up with these people around. At work, at church, at just anywhere. Its worse when you can’t say it out loud.

Two weeks ago, I had some soul searching and I decided that I want to be less bitchy. I believe I will have less problems once I Let It Go of all the things that pissed me.

Two weeks later, I think I am only partially right. I think if I start being the sweet, tolerant, embracing person, I will morphed into the kind zombie that so many people are.

So maybe during those soul searching, when the Word of Let It Go came into my mind, God was probably asking me to Blast it, Slap them, Say it and Let It Go, not hold back. After all, it is being Christian to be true to ourself.

This little entry is to remind myself not to be a meek, in effective, fake, run of the mill, souless person. Let It Go, say what you mean Lilian, and never be afraid to point out the obvious.