Many years back, there were blogs and only blogs. So, those of us who chose to be bloggers were responsible for inviting our blog wars. We got no one to blame but ourselves should we get negative comments or dissed by strangers.

But now, Facebook and all the other social media sites have opened the can of worms. Now everyone can online. And hence, everyone get trolled, get dissed, get all sorts of negative abuses or in my favourite Hokkien term – kena tiu. 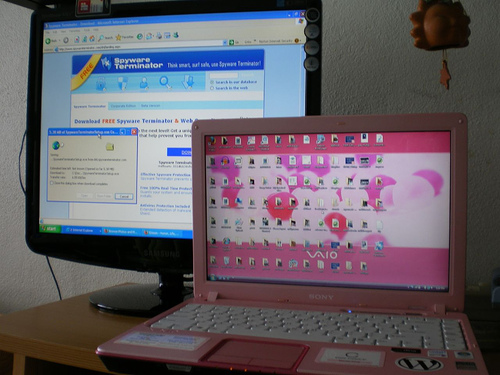 (My old Sony Vaio, in pink and costed me over RM7K and my iMac which was confiscated by the police but returned to me in nice condition, but thats another story. This is a very old photo…now I am darn broke because I am no longer a blogger but some gomen people earning meagre pay but I think serving bigger purpose so its alright.)

For us the seasoned bloggers, we have developed a more cunning approach to things online. We know what to put up and what to say. Things have to be very politically correct online because you never know whom you can accidentally offended.

People tend to get so self-righteous and so full of opinions. I would call them so full of shits, actually. But do they know they are full of shits? No. Not ‘online people’. They think they are always right. 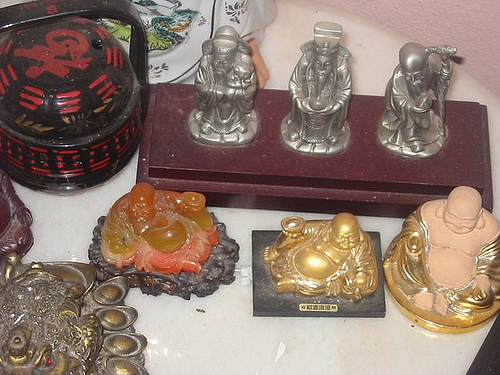 For example, the other day I talked about laughing Buddha and refer as fat man. Someone got offended. So yeah, nothing you say can please everyone. The above used to be my collection of laughing Buddhas. Some of them are gifts. And frankly, I have no idea where I put them now, after I converted to Christianity. And no, it is not about religion. But you know lah….everyone wants to be seen as defending their faith. And even in this case, if there is one Christian who comes along, that person will accuse me of not being ‘Christiany’.

So yeah, online life is like the story of the donkey, old man and son. If you follow all the idiots’ ideas, your donkey will fall into the river, you wont have a donkey to sell and in the end, the old man and the son will die of starvation.

End of the day, everyone gotta learn that shits will hit the fan and they will probably get it. I got mine alright…been to the police station three times, been questioned like I am capable of causing a revolt and all that nonsense.

Ultimately, each of us have to face our own conscience. But unfortunately, nowadays, people do not have that conscience anymore. I teach my children and also the children in church that conscience is that little voice we feel within us when we do something wrong. That Jimini Cricket of Pinocchio. It is the godly voice within us. And for us Catholics, it is the Holy Spirit that dwells within us. The one who prompts us, pointing out right from wrong, that thing that prevents us from committing very bad things.

I am shocked at the kind of shitty opinions dished out by perfect strangers over several issues. People seem to see things from their miniscule mono-vision. Kids were left to fend for themselves in Sweden but do people see and feel their plights or the parents? No….these bunch of morons will talk about racial and religious issues. There is absolutely no compassion, no empathy, no feelings involved. All they see are hatred and animosity.

There are many more cases. I suppose if we do not have this freedom of being online and that accessibility, we will get less involved in all the negativities. But then, we will miss out the positive things.

So, welcome to the big bad world of online. You are going to get hurt, real bad. So be smart and play it well. Unless of course, you want to fight it out just for fun.